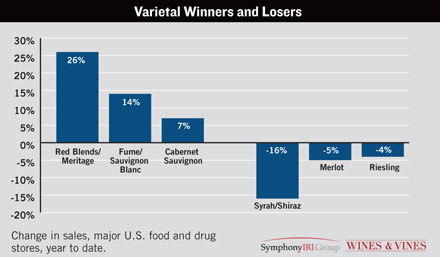 Ménage à Trois, Apothic, Cupcake and 14 Hands led the category, according to the Symphony IRI Group, a Chicago-based market research firm. “This category just continues to be the place to be,” said Curtis Mann, SIG’s director of client insights for wine. Mann explained that the fast-growing red blends reflect a change in the way consumers choose wine, going beyond a preference by varietal or place of origin. “The market structure in wine is

usually ‘flavor comes first,’ so this is really a new approach,” he said. “Now the attitude is ‘I am less worried about the flavor, but more that I drink that brand.’ The brand has kind of flipped the hierarchy.” Red blend/Meritage wines have sold $200 million this year through Sept. 9 in the stores that

SIG analyzes. Scanning the latest SIG data for the varietals with the fastest rates of change in sales, Wines & Vines also found other big winners and losers.

The next hottest varietal was Fumé/Sauvignon Blanc at $176 million in sales and a 14% growth rate. New Zealand led this group, as its sales alone grew 29% and lifted the whole category. “New Zealand Sauvignon Blanc has been doing well for a really long time,” Mann said, “but now it’s on fire.” The average price is a relatively high $11. California Sauvignon Blanc has also done well in price ranges from $11 up. Cabernet Sauvignon is a much bigger seller with $507 million, and it still grew by 7% despite the inherent difficulty in achieving a fast growth rate from a big base. “That story is about premium,

premium, premium. Cabernet is up more than 27% in the $20-plus category,” Mann said.

Then there is Syrah. The category of Syrah/Shiraz was the biggest loser by percentage of sales, dropping by 16% to $58 million. Australian Shiraz has declined along with domestic Syrah at most price points. Even powerhouse Yellow Tail shrank in Shiraz sales, while still doing well with

its other varietals. One common criticism of Syrah is that wine styles vary so widely that consumers don’t know what to expect when they buy a bottle. Another is that the U.S. hasn’t developed a marquee winery to wave the flag for the varietal. “There’s no Opus One of Syrah,” Mann observed, “so I

think it’s more of a marketing problem than anything.” One bright spot, however, was that California and Washington Syrah in SIG’s highest price

U.S. table wines of all types kept their 7% growth trajectory with $5 billon in sales during 52 weeks, and tallied 3% growth in volume. The average case price grew by $2.36 to $69.66. Domestic wines accounted for 79% of sales, and California claimed 72%.