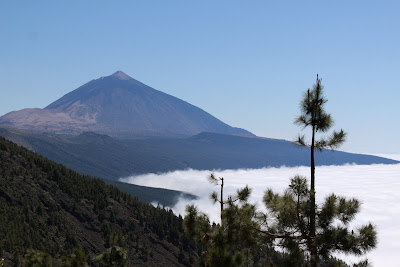 Tenerife's Teide, the volcano that is the tallest mountain in all of Spain
and third tallest volcano in the world. Photo by Gerry Dawes©2009.

I have been traveling the gastronomy, wine and tourist roads of Spain for more than forty years, but until May of this year, when I was asked to report on my travels in The Canary Islands, I had never stepped foot on any of the seven major islands–La Palma, La Gomera, El Hierro, Tenerife, Gran Canaria, Fuerteventura and Lanzarote--in this volcanic archipelago located some 1100 miles (or a three-hour flight from Spain’s capital, Madrid).

Wow, did I get a surprise! I expected the Canary Islands, which is one of Spain’s 17 comunidades (regional divisions), to have a lot in common with the rest of Spain with a few interesting food and wine twists. What I found on these fascinating islands off the coast of Africa in the Atlantic Ocean is a culture as distinct from the rest of Spain as Hawaii is to the mainland United States.

In fact, the Canaries are sometimes referred to as “Europe’s Hawaii,” because it is where a lot of Europeans go for the year-round delightfully mild climate, which makes for prime beach vacations, though these islands offer far more than just beaches, as I was pleasantly surprised to find. And the wild, evocative, extinct (and not so extinct) volcano-dotted landscapes, deep blue-green seas and exotic climates that change from north to south on these generally small islands are the stage for distinctly different experiences from what you might expect to find on the Iberian Peninsula, which Spain shares with Portugal.

Here you will find not only the influences of Spain, Spanish Galicia and Portugal, but Africa as well, and certainly not least to native Canary Islanders, the still powerful pull of the aboriginal tribes such as the Guanches (Tenerife), the Canarios on Gran Canarias and the Gomeros, who communicated down the steep mountain valleys by means of the Silbo Gomera (whistling signals). Thought possibly to be descended for tribes in Africa’s Atlas mountains (Lanzarote is only 70 miles east of the African coast), the original inhabitants of the Canarias lived in these islands from at least from 200 BCE (some believe 1000 BCE) and experienced Phoenician, Greek and Roman expeditions.

Once the native inhabitants were subdued the Spanish Crown, the Canary Islands became the last stop–and supply life line–for explorations of the New World by Spanish and Portuguese explorers and the continual sailings and return of the explorers fleets seeded the Canaries with an influx of New World products. In fact, here, many of the ingredients used in Canary Islands cooking–corn, cilantro, watercress, hot peppers, tropical fruits (papaya, mango, guava), unique varieties of potatoes and many other items–that the islanders have used since the exploration period never emerged as essential elements in most Spanish mainland cooking. But these ingredients took hold here tenaciously and form the basis for many dishes that are unique to the Canaries.

Fish and many other dishes are served with three of the most ubiquitous and defining elements of Canary Islands cuisine: Gofio (toasted flour, the true national culinary supplement that predates the conquest, though several versions include toasted New World millo, or maize, flour); the quickly addictive papas arrugadas (special Canary Islands varieties of small potatoes, including “black’ ones, “wrinkled” by cooking them in sea water or heavy salted tap water); and the wonderful mojos, or vinegar-and-oil based dipping sauces served with almost every Canary Islands meal. 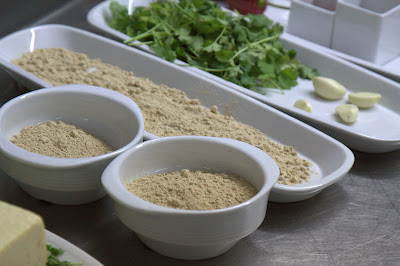 Gofio flours are often served as a dip with raw onions , as an accompaniment to fish dishes, soups and other dishes
and are often put out in bowls on tables in restaurants specializing in native cuisine. 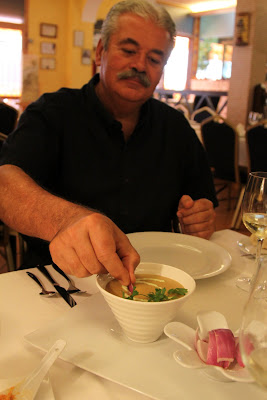 Papas arrugadas are often served as a appetizer and just as often as a side to fish or meat dishes,
along with usually two vinegar-and-oil based mojos. 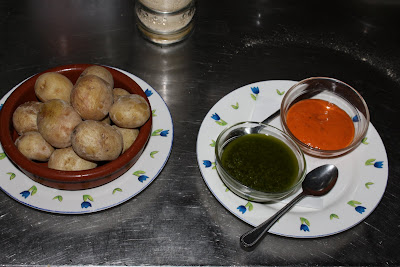 The mojos most frequently encountered include:

Perhaps the star version is the famous mojo picón, made with red chili peppers and hot paprika, which makes a picante sauce that is anathema to mainland palates and is a sensation absent in most mainland Spanish regional dishes, except in gambas al ajillo (which uses a slice or two of dried cayenne pepper), in the sauces for patatas bravas and in the Basque Country, where red chilis are used in several dishes.

cabrilla (a type of grouper)

Some of the fish come from local waters (quite deep just offshore due to the abrupt volcanic nature of the birth of these islands), but many of the varieties are caught in the shallower waters off the coasts of Morocco, Western Sahara (unil 1975, Spanish Sahara), Mauritania and Senegal. Usually these fish are grilled a la plancha (on a flat-iron grill), sometimes a la parilla (grilled over wood fire) and sometimes in fish soups and stews, caldo de pescado (fish soup, Gran Canaria) or cazuela de pescado (a fish stew casserole; Tenerife).
Other typical Canary Islands dishes include fried conejo en adobo (rabbit marinated in olive oil and vinegar with bay leaf, thyme, oregano, chili pepper and saffron); potaje de berros (a watercress-based soup with beans, pork ribs, yams, potatoes, cumin and paprika); cabrito en aliño (goat marinated with white wine, vinegar, garlic, oregano and then friend and sauced with the hot marinade); and Carribean inspired ropa vieja, leftovers from a typical stew (chicken or meat, chickpeas, carrots and onions) sauteed with spices.
Desserts include bienmesabe ("it tastes good to me"), made from almonds, sugar, lemon, cinnamon and egg yolks); huevos mole (beaten eggs cooked gently in a bain-marie and served with lemon-cinnamon syrup); and bollos de millo (cornmeal buns).
There are also several distinguished Canary Islands cheeses, usually made with goats' milk, sometimes with mixed ewe's and goats' milk: Majorero from Fuerteventura is the most famous, but queso palmero (La Palma), queso de Gomera and the cooperative Arico in the Abona area of Tenerife, which made a gofio-covered goats' milk cheese that won first place in the 2009 World Cheese Awards in Dublin. One of the most typical dishes in the islands is almogrote, a spread mad from aged Gomera goat cheese, olive oil, chili peppers and hot paprika. 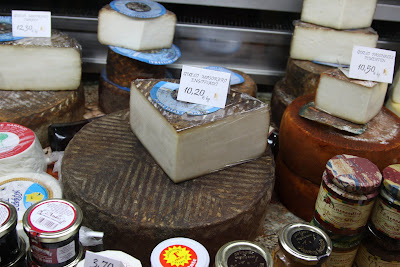 Canary Islands wines, above all the white wines and sweet wines are fascinating, often delightful companions to the local dishes. The Islands have a wide variety of grapes, many of which disappeared from the Iberian Peninsula when it was hit by the late 19th-Century phylloxera plague that devastated European vineyards. Some of the vineyards, especially those on Lanzarote, planted in holes in volcanic ash to collect life-sustaining moisture from dew and partial lava rock walls protect them from the forceful winds, are some of the most unusual and striking vineyards in the world. The Canary Islands have eleven D.O.s (denominaciones de origen) governing the production of wines.

Most of the best dry white wines and the best sweet white wines-among the greatest dessert wines of Spain-are made primarily from the Malvasía grape variety. Predominant red varieties include Listán Negro and Negramoll. Among the bodegas to search out are Tenerife's superb Viñatigo (Ycoden-Daute-Isora D.O), Viña Norte/Humboldt (Tacoronte-Acentejo), Bodegas Buten's aptly-named Magma de Crater (Tacoronte-Acentejo) and Tajinaste (Valle de la Orotava). Three wineries of note on volcanic Lanzarote are El Grifo (Lanzarote), Los Bermejos, and the architecturally stunning, state-of-the-art jewel Stratus (Lanzarote). And from La Palma come some spectacular sweet wines such as Tamanca's Sabro Dulce and the excellent Malvasía Dulces from Carballo and Teneguía grown on the volcanic slopes (the last major eruption came in 1971!). 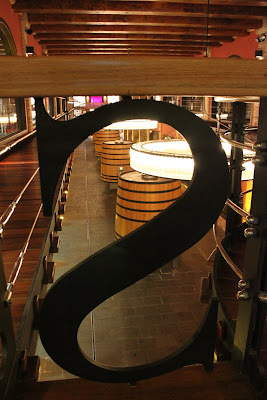 On this trip, I visited Gran Canarias, La Palma, Tenerife and Lanzarote. That still leaves food and wine adventures on Fuerteventura, La Gomera and El Hierro, plus a couple of smaller satellite islands off Lanzarote. After the rich experiences I had on this trip, it will certainly not be another forty years before I return to these exceptional islands again.


--The End--
About Gerry Dawes 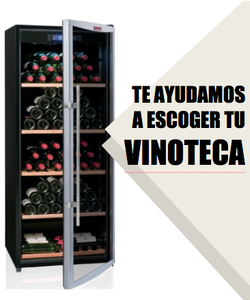